skip to main | skip to sidebar

Krishna Pulkundwar comes from a Village in Maharashtra with all the rural visual inputs from his childhood. His keen observation there of nature has stayed with him throughout. The colours, the play of light and shadow, the effect of rain, sunlight, clouds, even the moonlight changes how things seem and look.

But more, much more than all this Krishna was fascinated by textures. The look and feel of stones, barks, pebbles and leaves viewed through running streams. The ripples caused by a vagrant breeze, the effect of falling rain. This inspired a great to recreate that on his canvases.

But Krishna is no longer a village lad. He moved to the big bad city of Mumbai! He is a Professor at Sir J.J .Institute of Applied Art. He has moved ahead. Completely comfortable in his skin as an urban person, he is no longer wowed by the city he lives here, is completely acclimatised here and belongs here.

What has stayed with him is the continued fascination with texture. The look and feel of city walls , the stones on our streets , the puddles and potholes , Yes , and the falling rain , the rippling breeze on the trees and waves of the sea . It is still nature but in an urban environment.

To this is added modern attire. Working in a College, he daily sees the young dress – colours, shapes, textures again – and he is inspired anew. Being surrounded by the young is a wonderful thing – you are constantly challenged, you interact with them at several levels, you are exposed to the various media that they use – and you have to update yourself – and move ahead.

With time comes a certain maturity. Krishna now looks beyond the obvious, he is more discerning. In the visual language, he is now pared down, more refined. He has moved away from the common craft of painting to a more creative level, with much more thought and soul behind it.

There is much more focus behind Krishna’s work now, not so much impulse and more deep thinking. The forms have been minimised, the geometrics more diffused, the colour palette more homogenised. The simplicity is what makes the paintings so elegant and sophisticated.

And as always, the texture is the main thing. Doing away with a conventional brush, Krishna is using a palette knife, rollers, rulers and other implements he has created for his work. This gives the paintings a depth, almost an impasto feel.

Krishna is certainly MOVING AHEAD


Posted by Krishna Pulkundwar at 7:40 PM No comments: 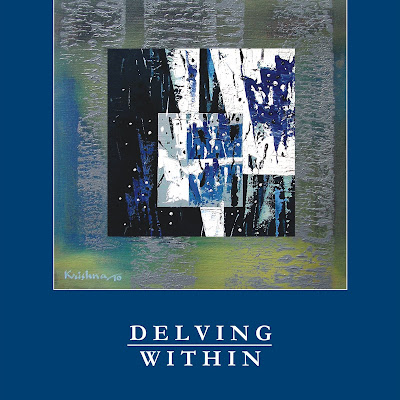